Following on from our last journey into the past…

I actually didn’t knit for a long long time. I left Shetland and went down south (by which I mean to the Scottish mainland), to university, and spent the next few years studying for my degree (in Japanese). In the way of crafty endeavours I also used those years to work on a big “Tree of Life” cross stitch. Which took me ALL FOUR of said years. But, coming to the end of that particular era, the knitting needles called again…

I was in my final year of university and as well as studying for final exams and all that goes with them, I applied for a few graduate jobs for when I had finished my degree, in the hope of gainful employment. One of which was for the intelligence service (aka spying!). I was invited to go all the way to the south of England for this application, to take a translation test, to see if I was good enough to translate whatever it was the Government would want translated.

At around the same time I found out a family member was expecting a baby. So I determined to knit something for the little one. Even though I actually don’t really like knit baby items, have no interest in them and don’t find them especially fun, I still don’t. My knitting contrariness once again came to the fore (a trait I have maintained to the present day).

It was going to be a long train ride down for the test, plus a stay overnight, and I didn’t want to die of boredom so I thought why not set up this baby knit project to keep me occupied. I didn’t have any knitting supplies. I’d left the few bits I had all way up north with my parents. So it was time to go shopping! At that time, a few of the department/general home stores near where I was living still carried knitting supplies. So I got myself off to Littlewoods (which was a big shop selling various and random home items, plus quite awful polyester clothing for the more mature lady) and picked out a baby pattern, needles, and “wool”. Wool being pale yellow acrylic. Because EVERYONE knows  that all new babies of as yet unknown gender must be welcomed into the world bedecked in ill-fitting yellow acrylic items, knit by a relative. It’s the rules! I also purchased some elastic for the leggings that would be part of the baby set, swiped my largest cross stitch tapestry needle out of my super slow project, picked up a pair of scissors and shoved the whole into a plastic bag and dumped them into my travelling bag.

As I had feared, both the journey and the overnight stay were deadly boring. So I cast on and I knit and knit and knit. I started with the little hat, working on the train, and got that done when I arrived in the evening. All bar the sewing up and the little pom pom (all UK patterns at this time seemingly having to be knit flat and sewn up, whatever they were!). The only bit of the set that really interested me a lot was the little pair of leggings with feet in them, because of the shapes. So that’s what I picked to make next and, while I was away, I started on those too, all the while really enjoying rediscovering how much I actually liked the knitting part of things, watching the loops form on the needles in neat little rows and the pieces of fabric growing and growing and shaping in and out. 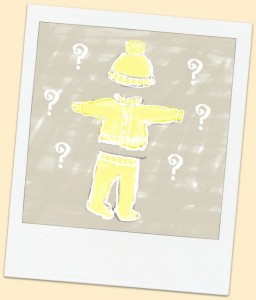 Once the test was done and I got back up to university, I continued to work on the little set from time to time, shaping the tiny toes, sewing up the two halves of the trousery bits, threading the elastic into the little channel I’d made, then moving on to the cardigan and not being sure which side to put the buttons on! I remember being so pleased with myself when everything was done – right up to the pom pom embellishment on the hat – and the whole secretly worked on surprise was wrapped up ready to gift.

I’m not too sure the recipient really liked these yellow offerings as much as I liked rediscovering knitting, but the thought was there! This was the time that I’d reminded myself that I could knit, and that I can knit what I want to, from a pattern, like a “real” knitter, as well being able to knit without one (much of my early stuff was whatever came out of my head, and I was totally convinced that the use of patterns equalled mastery of knitting), AND I was knitting baby things, just like all those experienced knitters seemed (to me) to really like to do!

By the way, I did pass the translation test, and the baby was a beautiful little girl who didn’t look too impressed with the yellow! However, I didn’t take up the opportunity to eavesdrop on behalf of Her Majesty…..as I found I had more pressing matters in life to attend to at that time…(like expecting my own daughter!).