I recently finished a cardigan (see my FO post) and on this one I did a lot of extra finishing work. I really dislike the gaping/stretching button band look that seems to happen with knitted cardigans….

So I did some crochet reinforcement, took a pic and have made some diagrams to show you what I did. This is a two-stage process, the first is creating a crochet chain on the knitting, the second is sewing the crochet chain to the knitting. It is time-consuming, but well worth it for a lovely finished look.

You’ll need to know how to slip stitch crochet on to knitting first. This is just creating a chain of crochet stitches up the surface of the knitting, I did that on the wrong side of the work, up both edges of the button band (everything is explained in more detail below, with both left and right handed photos)

To slip stitch crochet on to knitting:

Step 1. insert your hook into where you want to start, yarn over the hook, and then pull the yarn back through the knitting to create a loop.

If you want to see this in more detail, check out TechKnitter’s page on crochet for knitters

I used a crochet hook a little smaller than the needles I knit the cardigan with. My knitting was on 4.5 mm needles and I used a 4 mm crochet hook for the slip stitch chain. I slip stitched into each stitch on the knitting, working my way up the second row on the button band (counting rows from where the button band was picked up). Use your best judgement as to how to space your crochet stitches, but always work into the same row of knitting, to keep the line straight. Fasten off the chain when you reach the other end of the band. 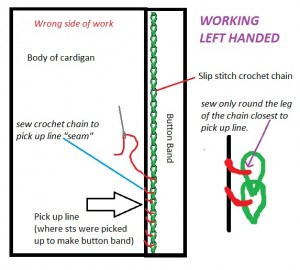 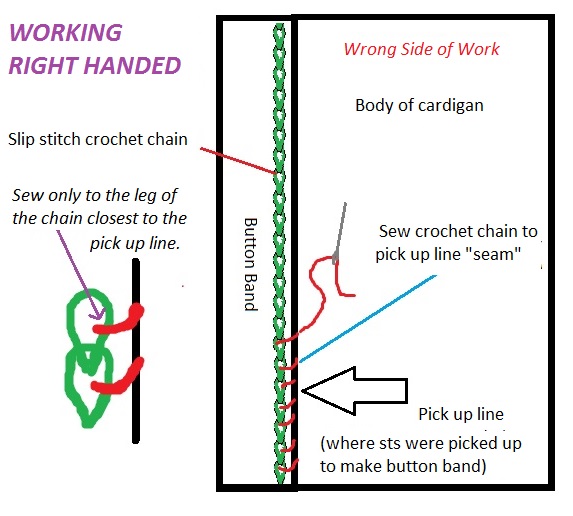 The next step is sewing (yes I know! but it is worth it). I sew one side of this crochet chain, to that pick up line. This stops the fabric wanting to fold around the crochet chain and creates a strong edge which is less prone to distortion when the garment is worn. It has the added bonus of really neatening off the pick up line “seam” that was created when stitches were picked up for the band.

Step 1. First, bring the needle through the raw edge of the pick up “seam”, from the main body side of the piece, through to the button band side.

Step 2. Next, bring the needle through the closest edge of the closest stitch in the crochet chain, bringing the yarn over the top of the chain edge first and then out underneath it. Repeat steps 1 and 2 until all stitches in the chain have been sewn to the pick up “seam”.

Make another crochet chain on the other side of the button band, two rows in from the open edge of the band. In the same way as above, whip stitch the chain to the knitting, one row in from the bound off edge. Do not sew it directly to the bound off edge. This keeps the work neatly hidden and tucked in behind the edge, whilst also reinforcing the outer edge. The photos show the outer edge of my band all done, with the chain already worked on and sewn in.

This process is quite a lot of work but I find it gives my cardigans a much better finish!