I was a troubling teenager. My family kept moving around the country, I had problems, I hated everything and everywhere.  I was depressed and mean and moody and stubborn and rebellious. I eventually ended up being sent to a boarding school because my parents were desperate and managed to get me a place there. It was the one place I couldn’t easily walk out of and stop attending since I was trapped! I made really good friends and it worked. But during this time my parents decided to say goodbye to the mainland UK and move all of us (I have three brothers too) up to the Shetland Islands.

Now this is far. So far! I grew up in Suffolk in South East England. Not only were we moving to a whole other country, to Scotland, but as far north as possible. It takes a 14 hour overnight trip on a ferry, often in rough seas, leaving from Aberdeen in the north east of Scotland. It is closer to Norway than to the rest of the UK.

It was also a lot of miles away from my Nan. Because I was at school on the mainland in the south of Scotland, I still got to go see her during some of the shorter holidays, I would go down on the train for half-term and she’d look after me. The rest of them I went back up to Shetland.

Now you would think that for someone who knits, this land of wool and sheep and traditional beautiful patterns would be wonderful! But remember I was a grumptious ungrateful teen.

I hated it. In my mind, there was nothing to do, nowhere much to go without a car or a long bus ride (Shetland is big..) except down to the shore to look at the sea and the sea otters, birds and seals.  Our pet cat, who was partial to picking fights with the local wildlife, would follow me and keep me company.

Oh yes it was beautiful, the landscape is amazing. The view from my bedroom window would probably cost a fortune if it were marketed as a hotel room. But I felt trapped, bored, deprived of normal things like lots of shops and a normal school life and friends down the road, it was hard to get to know people as an incomer who didn’t actually go to school there, and I missed my Nan and Grandad very much. I was just biding time each holiday until I could get my feet back on the mainland.

It was during this time I became the absolute anti-traditional knitter. I was not going to pick up needles, fill them with beautiful wool and learn how to paint complicated patterns in the yarn. Nope. I was going to turn my back on the sheep and do what my Nan did….find comfort in the acrylic…

It can be bought up there. And boy did I buy it! From Harry’s in Lerwick (emporium of every miscellaneous object one might wish for). In three shades of purple.  And I picked up my needles and I knit the most uncomplicated things I could think of. A load of rectangles. Piles of purple rectangles. 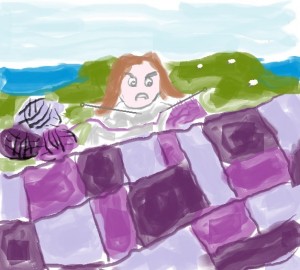 Every time I finished a rectangle, I would sew it to the previous ones. It became a massive blanket that I would sit under while I knitted more of it and sulked. It was my teen comfort blanket.

Of course later on I would learn to enjoy pure wool and colourwork and lace and all the good things that come from Shetland, learn about them, and feel very lucky that my parents would be able to find and post me down anything I wanted from these famous knitting isles. Just not yet! I simply wasn’t in the mood…