These are the long socks that I had been working on. They are nice big knee highs. I’m happy with how they came out.

This yarn is a self-striping multicolour, with sparkles! It’s King Cole Shine DK. The colours are really pretty and I enjoyed how they came out. These are easy care house socks for loafing about in, as the yarn is acrylic and DK is quite thick and snuggly.

While I’m here I’ll show you something I was messing about with at the end of last year, I’m experimenting with creating a slipper pattern. So just playing around. My daughter named this funny little trial piece “horrible disgusting elf shoe” 🙂 Later in the year I plan to settle down on this one and tweak it and turn it into a much better looking slipper for a pattern. This is aran weight but I think it will be more satisfying to work in a chunky, so I’ll look for something for that. These colours are a bit love/hate, I love them and most other people seem to hate them, so I will probably pick out some others (this is just what I had) and I want to keep the striped look going. 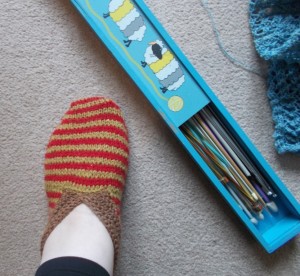 The blue sheepy needle box next to my foot there is an old one of my Nan’s that she gave me a few years ago now. Peeking out on the top right is my Friperie scarf which was on the needles at the time too.

The slipper inventing is on hold for a little bit as I’m currently working on a new pattern for something else, which is what I’ll be putting out next. Here’s a glimpse….I’m not saying what it is yet! This yarn is a mix of superfine alpaca, wool and dralon and lovely and soft to work. Hopefully I’ll be able to show you more in our WIP Wednesday posting this week. 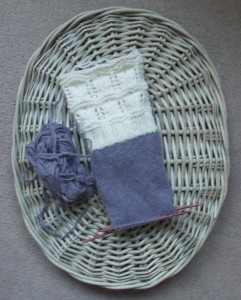 As you can tell, Scotland still isn’t getting an awful lot of daylight, which makes it really hard to photo things, but hopefully that will get better soon so my photos will come out a little nicer.