Naturally, at this time of year, thoughts turn to all those past Christmas memories, some of which are intertwined with my early knitting life. Sometimes woolly wonders used to emerge from the packages my Nan gave to all of us four children, myself and my elder brother, and later on my two wonderful little brothers. All fun to open, containing hilarious and baggy jumpers, scarves and hats in lurid colours that meant we would certainly manage to avoid being hit by any moving vehicles on winter walks to school, an authentic recreation of Dr. Who’s scarf for my science fiction loving big brother (she was on trend before it was even fashionable to knit those!) sometimes toys. A knitted Snowman from The Snowman (Raymond Briggs) was a highlight because she also kept a moneybox that looked just like him, in ceramic form, and throughout the year she would put all her spare five pences into that moneybox, then let us open it and divide them between us just before Christmas. We loved The Snowman.

So these were our knitted Christmas gifts. One sticks in my mind more than any other, so here is how that story goes… 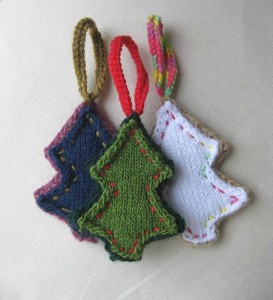 When I was really quite small, I had a doll, well two dolls. These were my treasures. Both little plastic baby ladies, chubby, with moveable joints. I was supremely unimaginative in naming toys at that age. I also had one teddy bear, his name was “Mothercare Bear”, because he had been bought from the shop Mothercare. This gives you a clue as to how toy-naming goes with me (I still find it incredibly hard to name my toy designs, they are generally pretty literal). One of my dolls was a gift from my grandfather, who had that year at last somehow been able to go to Poland and see his family, for the first time since he had left during WWII. He brought my back my newly-named “Polish Dolly”. She had brown curly hair, a button on her back and a blue vinyl disc inside her belly. When the button was pressed, the disc span and she spoke to me in Polish. I didn’t quite know what she was saying and it had a lot of “shhh” sounds in it, but I promise you that I made her say it often! My other doll, she was my absolute favourite. Given to me by my parents. She had auburn curls, the prettiest chubby cheeks and a perfect mouth. My mother asked me what I was going to call this one. I thought hard about it…then I told her she was “Ellen’s Friend”. That was her name from then on.

Ellen’s Friend was always with me in my room, we played together, we read books together, we went to the imaginary hairdresser’s together. All the usual childhood adventures. But after a while she needed new clothes. She didn’t have an extra set. This displeased me greatly. I showed her tatty ensemble to my Nan one day. Then thought no more about it and promptly “borrowed” some of her old curlers, the ones with the sponge middle and the plastic retainer, so I could curl the hair of Ellen’s Friend to smarten her look.

That year, Christmas rolled around and caught us yet again, in its love and happiness. We always spent Christmas Day at home, so it was just my parents, me and my brother. We woke up to lumpy socks (borrowed from my father as he had the biggest feet!) which invariably contained satsumas and a box of playing cards or pick-up-sticks. Then we rushed down to see what was in all the mysterious packages that had appeared under the tree by magic, pestered my father while he cranked giblets and sausage meats and garlic through the metal mincer as we watched the little worms of a family recipe for stuffing (from my Polish grandfather) emerge through the metal holes, and helped my mother peel the sprouts that nobody actually liked to eat much but for some reason had to be there, cutting holy crosses into their bases and filling the colander with them. Then we all ate far too much, played games, and us two small people watched TV while my parents fell asleep on the sofa from the exertion of it all (the usual type of Christmas I think!).

The next day was Boxing Day. In our family this meant only one thing. Time to go to Nan’s house, for Christmas: Part II. It really was like a second one. She had kept our presents there, we would go and open them, have a big tin of sweets thrust into our faces at every opportunity, goodies brought to us on trays, a big dinner cooked by my other grandfather (my English grandfather, who was a fabulous cook, as he was fabulous at everything he turned his hand to), more TV, more grown-ups sleeping while we battled each other with new toys, the re-run! Ellen’s Friend came along for the journey there; my mother told me not to forget to bring her so she could enjoy Christmas too, and in case I needed her to play with when everyone was preparing dinner.

We got there, we hugged, we smiled, we laughed. We ran around the house being nosey, the sausage dogs barked and everyone talked loudly and excitedly all at once. When all had settled I received my present. It was big, it was squishy. It didn’t rattle. Wrapped in thin rustling matte paper, white with painted snow scenes containing elves that looked like they were from another era; none of this shining metallic modern stuff that my parents wrapped things in!

I looked excitedly at my Nan, peeled back the sticky tape, and pulled open the paper. Something was peeking out, new, clean and bright. Red wool and white wool, knitted together. I tore the rest of the paper away… 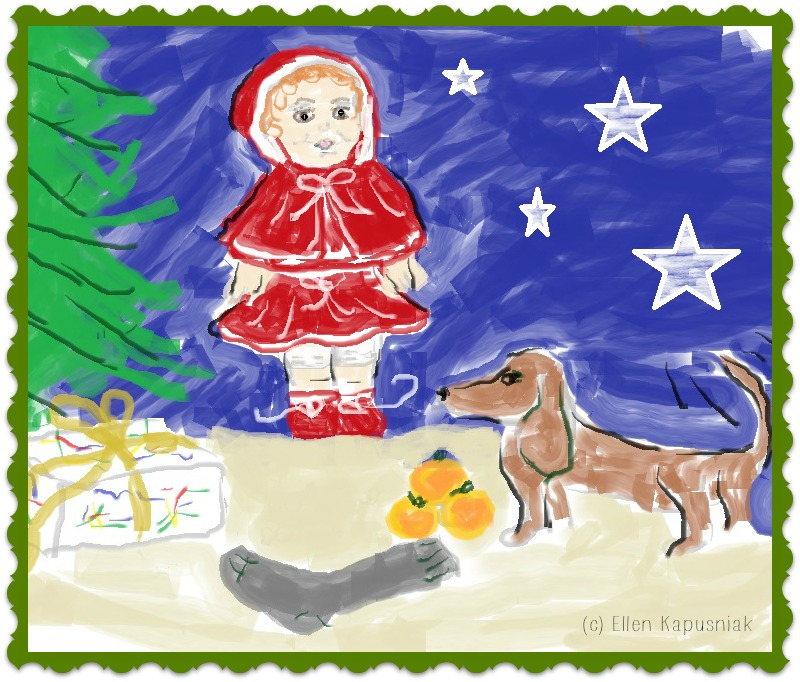 An entire Christmas outfit for Ellen’s Friend! She had a red hooded cape, with white trim, a little red and white jumper, a substantial red circle skirt with white trim, she even had white lace edged knickers to go underneath her skirt, a white lace edged vest to go under her top, and red and white knitted boots, with drawstring ties. She had everything she could ever need! She was surely going to be the most stylish dolly in the entire universe that winter in her clothes, all beautifully made, all somehow exactly the right size, all just for her (and me of course).

If you knit, and have little children to make for, do think about knitting them something for their most loved toy. A blanket for their treasure to snuggle in, a hat, or even a whole outfit. I promise you they will remember it forever!

Want to try a vintage dolls outfit? I’ve found a pretty pattern for a set that could even rival that of the one worn by Ellen’s Friend!